Steel structures are often fabricated by bolting (or riveting) structural components together. Bolted joints result in multiple crevices between the bolted members and fasteners. These crevices are typically more susceptible to corrosion than flat surfaces because they tend to retain water/contaminants, they are difficult to properly coat and crevice geometry tends to support electrochemical phenomena that accelerate corrosion. This article will evaluate the effectiveness of various coating practices at mitigating corrosion around these joints.

As seen in the January 2018 Edition of the Journal of Protective Coatings & Linings (JPCL) and on Paintsquare.com

For new structures, the state-of-the-art approach is to apply zinc-rich primer to mating surfaces prior to assembly and to use galvanized fasteners during assembly. Unfortunately, there are cases where this is not always possible. Obviously, it is typically unrealistic to disassemble, prime and re-assemble existing structures. During maintenance painting, stripe coats and caulking are often used to provide added protection to crevice areas. Though effective, caulking can be expensive and may not be necessary on all surfaces.

The authors will discuss the results of a laboratory study investigating the degree of crevice corrosion protection provided to bolted joints using different coating schemes. Forty different combinations of surface preparation, fastener coating, caulking extent and coating sequence were evaluated on aged and new steel assemblies. The test assemblies were exposed to cyclic accelerated corrosion testing and evaluated for rust staining, blistering and pitting within the crevice area. The data presented will help quantify the benefits of alternative approaches for corrosion mitigation in fabricated steel joints.

Complex panels were assembled to replicate various geometries and include various materials that are seen on steel structures. A steel panel 6-inches-by-12-inches-by-1/8 inch had three 4-inch-by-2.5-inch-by-1/8-inch-steel plates fastened to them with ½-inch nuts and bolts (10 black-oxide and 10 galvanized).  A 4-inch-by-2-inch-by-1/8-inch steel angle was also bolted to the panel. The panels were made in such a way that they had both vertical and horizontal water travel paths and a representation of bolted bridge structural geometries that contain crevices. 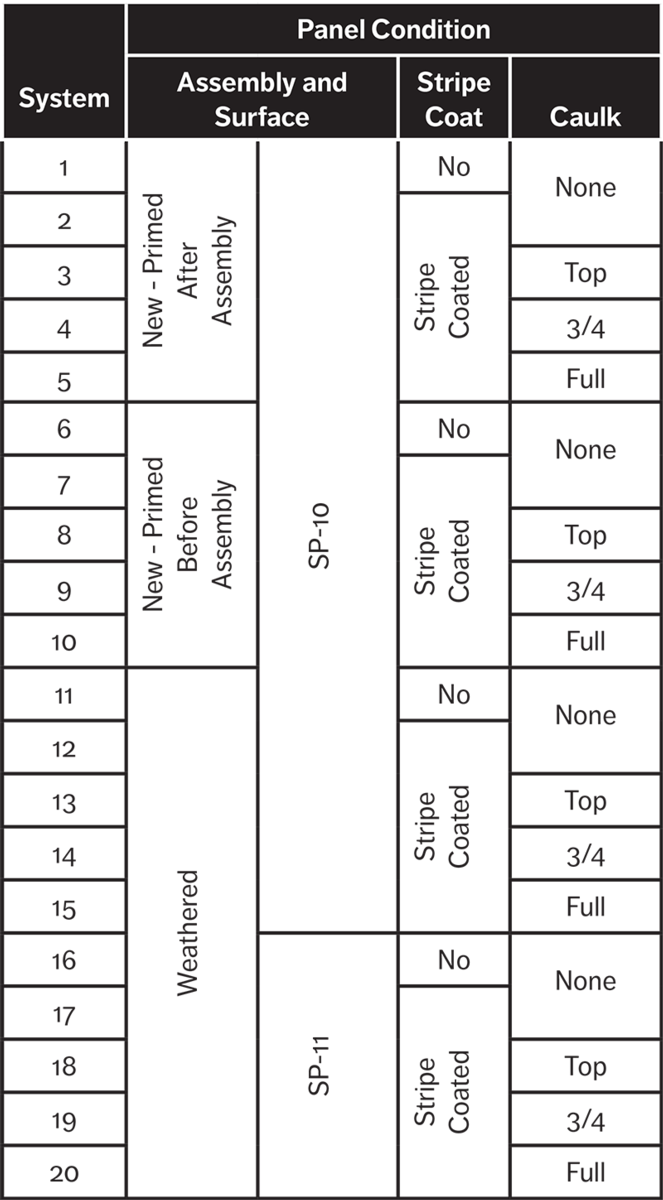 Table 1 shows the test matrix for the study. The existing steel, new steel and caulking methods are described in the following sections.

Prior to exposure, panels were coated with a light layer of epoxy coating (1 to 2 mils) over bare steel with no surface profile. Panels were exposed for 150 hours of salt-spray exposure per ASTM B117, “Standard Practice for Operating Salt Spray (Fog) Apparatus” and nine months of outdoor exposure in an industrial setting. Figure 1 shows the panels after weathering but prior to surface preparation procedures.

After weathering, the panel surfaces were prepared for coating  by one of two methods. Most panels were abrasive blasted per SSPC-SP 10/NACE No. 2 using 30-grit aluminum oxide to achieve a nominal 1-to-2 mil profile. One set of weathered steel was prepared to SSPC-SP 11 using a combination of needle gun and angle grinder to achieve a nominal 1 mil profile. Figure 2 shows representative weathered steel panels prepared by each scenario.

The second set of the test panels represented new steel assemblies. Half of these panels were assembled prior to abrasive blasting and priming with a zinc-rich primer. The other half was abrasive blasted as individual components, primed using the same zinc-rich primer and then assembled. Figure 3 shows representative new steel panels after assembly and preparation. All abrasive blasting was SSPC SP-10/NACE No. 2 blast cleaned using 30-grit aluminum oxide to achieve a nominal 1-to-2 mil profile. The fasteners on the panels were primed prior to assembly hand-sanded prior to additional painting. 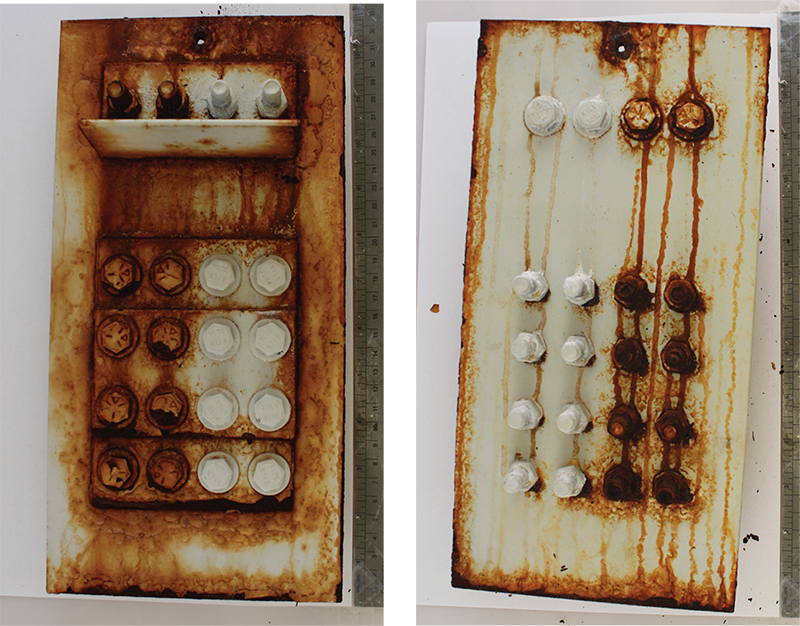 Fig. 1: Front (left) and back (right) of panels after weathering. All figures courtesy of the authors 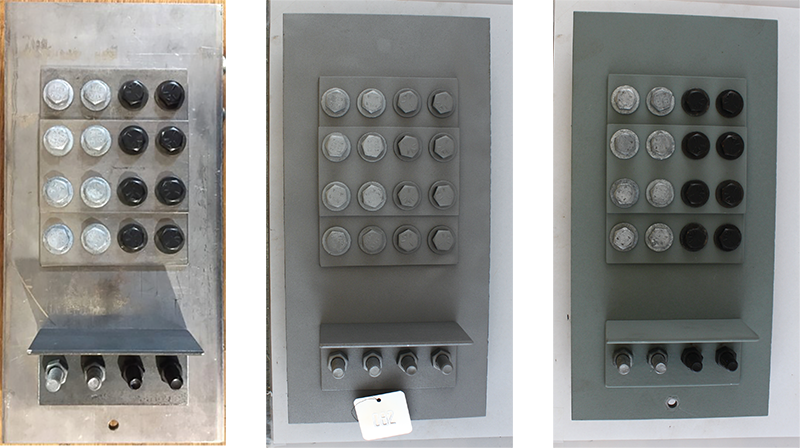 After coating application and following a full seven-day cure, the panels were exposed to 120 cycles of GMW 14872 Cyclic Corrosion Laboratory Test (Fig. 5).

Inspections were carried out at 20, 40, 80 and 120 cycles. Each panel was inspected for rust through (using ASTM D610, “Standard Practice for Evaluating Degree of Rusting on Painted Steel Surfaces”), blistering (ASTM D714, “Standard Test Method for Evaluating Degree of Blistering of Paints”), crevice corrosion and the percentage of bolts with corrosion. Following 120 cycles of corrosion testing, the panels were disassembled to determine the extent of pitting in each crevice.

Figure 6 shows the new steel panels that were primed after assembly. Overall corrosion of these panels at each cycle was very minimal with the exception of rust bleed from the crevices in three scenarios. Crevice corrosion could be seen along the sides and top of the L-channel and built-up assembly throughout the exposure testing for three conditions: no stripe or caulk, stripe with no caulk, and stripe with top caulk.

Figure 7 shows the new steel panels that were primed before assembly. The black-oxide bolts on these panels showed the most corrosion of the conditions evaluated and the panel that received no stripe coating showed the greatest bolt corrosion. These bolts were only protected by the epoxy intermediate coat. The remaining systems received a stripe coat of zinc-rich primer on the black-oxide bolts but still experienced corrosion much earlier than any of the other types of surface preparation systems evaluated. Other than the black-oxide bolts, crevice corrosion was less evident on the panels that were primed before assembly.

Figure 8 shows the abrasive-blasted panels and Figure 9 shows the power-tool-cleaned panels from the weathered steel scenarios. Not surprisingly, the abrasive-blasted repair system had less bolt and crevice corrosion than the power-tool-cleaned system. With both types of surface preparation, the best overall performing system was that of the full caulking; running rust was not evident after corrosion testing. Varying degrees of running rust can be seen from the crevices on the remaining panels. As expected, crevice corrosion was reduced with additional caulking.  Interestingly, stripe coating alone had a minimal benefit for reducing crevice corrosion.

The extent of crevice corrosion was noted at each inspection during the exposure testing. The top, sides and bottom of the three-coupon assembly, along with the top, bottom and sides of the angle, were inspected for evidence of running rust or rust through of the coating at these areas. Table 2 shows the extent of crevice corrosion after 120 cycles of exposure testing (red indicates that corrosion was present).

The only panels that did not display some form of crevice corrosion were those from the 3/4 and full-caulking scenarios. It was interesting to note that the new steel panels that were primed after assembly displayed less crevice corrosion than those that were primed before assembly though this may be influenced by running rust from the poorly coated black-oxide bolts.

The panels displaying the greatest bolt corrosion were panels primed prior to assembly. The black-oxide bolts that did not receive a zinc primer or zinc stripe coat displayed corrosion at the first inspection (cycle 20). Epoxy and polyurethane do not sufficiently protect the black-oxide fasteners for even a short period of time. If black-oxide bolts must be used, they should receive full and stripe coats of zinc primer, epoxy intermediate and finish coat.

Corrosion of the weathered black-oxide bolts was less evident on abrasive-blasted panels than on the power-tool-cleaned panels. This is not surprising, as existing rust in crevices was more thoroughly removed using abrasive blasting than power tools.

After accelerated corrosion testing, panels were disassembled for analysis of corrosion in the crevices. Figure 10 shows each panel dissembled.

Figure 13 shows that 3/4 caulking applied to new steel that is primed after assembly is the best way to prevent corrosion in these crevices. In one of the two crevice areas, the full caulking appears to hold moisture within the crevice of the new steel panels. As expected, the panels with neither a stripe coat nor caulking experienced the most crevice corrosion. The remaining three scenarios (stripe coat, top caulk and full caulk) had visually similar crevice corrosion on the new steel assemblies. 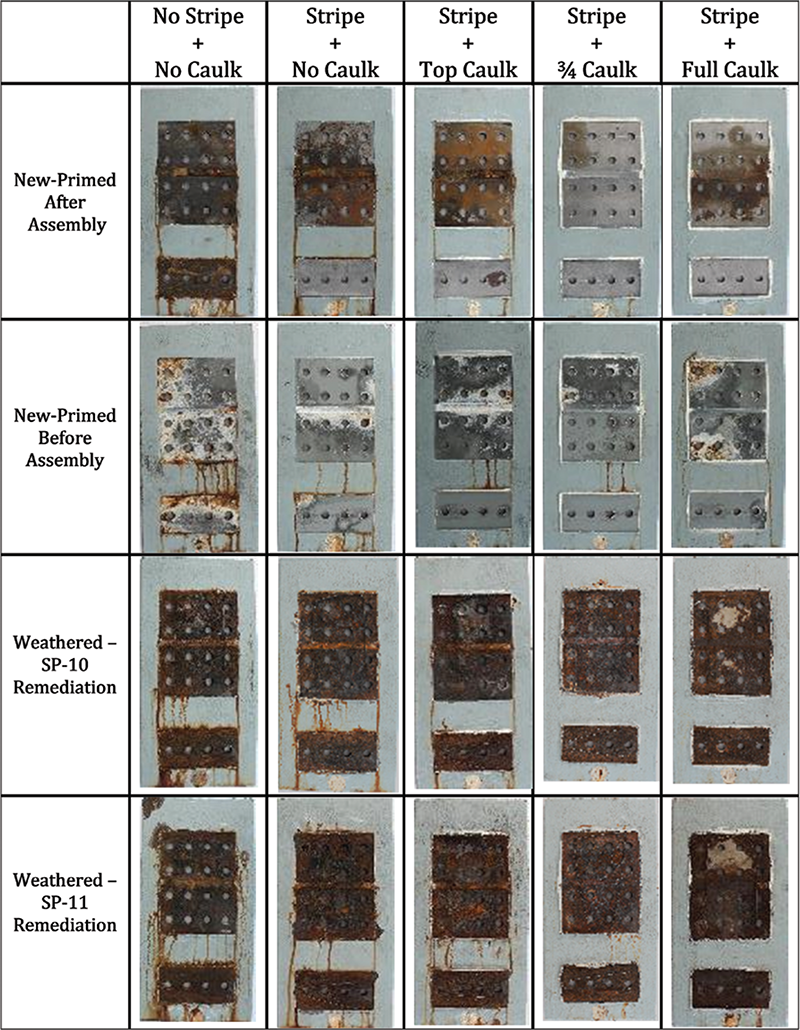 For weathered steel under repair conditions, the benefits of a full caulk system are evident. The remaining caulking schemes visually appear better than the schemes without caulking.

Comparing the two graphs, it is clear that deeper pits were measured on the panels representing maintenance painting of weathered steel. However, a certain portion of that pitting occurred when the test panels were being weathered (i.e., pre-rusted). For any given panel, it is not possible to know how much of the pitting occurred prior to the maintenance painting. Analysis of the remaining crevice surfaces may provide sufficient statistical data to get additional insight, however this article focuses on the two data sets individually. 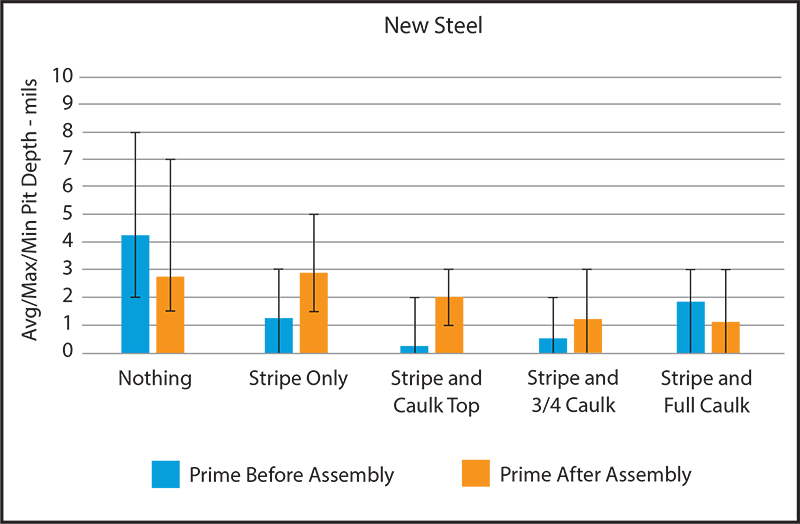 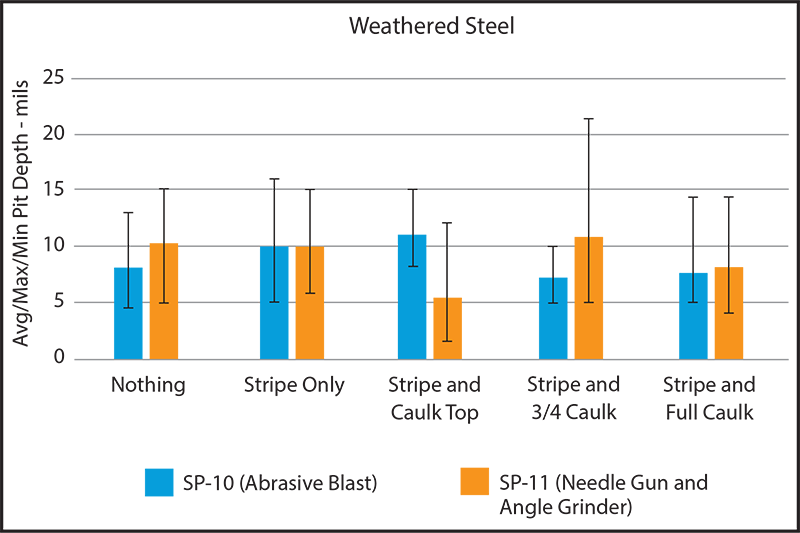 L – Channel after blastFig. 13: L channel before and after glass-bead blasting.

For the new steel painting scenarios, the pit-depth data corroborates the visual observations (Fig. 12). Pitting is clearly reduced by striping and caulking. The caulking scenarios that left at least one edge un-caulked had the least amount of pitting. Priming prior to assembly was also beneficial in these scenarios. Interestingly, priming prior to assembly led to greater pitting than priming after assembly for the scenarios that did not have a stripe coat or were fully caulked. Standard industry practice of priming surfaces before assembly and incorporating stripe coats was among the best performing scenarios, though the practice would benefit by adding limited caulking to reduce water ingress.

For the weathered steel maintenance painting scenarios, the observed pitting is probably dominated by what occurred during the pre-weathering exposure (Table 4). However, by comparison to the “nothing” set of data, there is some evidence that the following four scenarios will result in less pitting.

The benefit of all caulking scenarios is corroborated by the visual observations. The panel geometry contains 11 unique crevice surfaces. Analysis of the remaining crevice surfaces may provide sufficient statistical data to obtain additional insight.

The following conclusions were formed based on the results of the study.

Galvanized bolts perform better over time than do black-oxide bolts.

When working with weathered steel, full stripe coats and caulking of all crevices provide the best results in regards to reducing crevice corrosion and pitting.
As a best practice, mating steel surfaces should receive a primer coating prior to assembly.

Eric Shoyer has worked with Elzly Technology Corporation in various aspects of corrosion control and materials engineering for over eight years. He is an active member of several technical societies including SSPC and NACE International and is a registered NACE CIP Level 2. Shoyer holds Bachelor of Science degrees in civil engineering and structural engineering from Drexel University.

Peter McDonagh is the manager of the Triborough Bridge and Tunnel Authority’s (MTA Bridges and Tunnels) Bridge Painting program. He has over 20 years of experience in various aspects of corrosion control, coatings inspection,  program management, and materials engineering. He is a registered NACE-Certified Coating Inspector.  Peter holds a Bachelor of Science degree in environmental science from the State University Of New York, College of Environmental Science and Forestry.

Brian Prazenka has worked with Triborough Bridge and Tunnel Authority (MTA Bridges and Tunnels) in various aspects of corrosion control and materials engineering for over four years, and in the engineering field for over eight years. He is a registered NACE CIP Level 2. Prazenka holds a Bachelor of Science degree in civil engineering from Manhattan College. 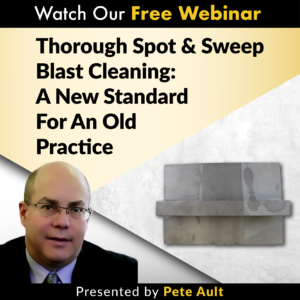 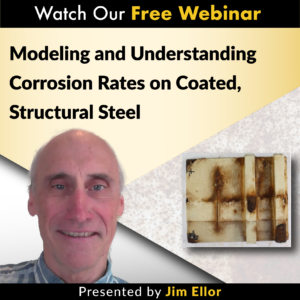